Hey fan fiction readers, this is so sketchy? So random. The sequel to Chad in chuckle city, for those readers who are reading this because you read the first story THANKYOU you are all Amazing and i'm touched that you liked the first one so much you came back fore more

Sonny joins the cast of a sketch-comedy series.

disclaimer: well if I owned Disney I'd be really joining the cast of so random on swac. Lets check the Disney website oh look the cast list hasn't changed, fff hasn't aired and I don't own swac :'(

'hehehe stop, stop it!' I giggled

we were all sat in the prop-house, Grady and Nico were fighting over the gaming chair I got them for their birthday, zora was in her sarcophagus, tawni was in the photo-booth taking pictures of herself and Chad was tickling me on the sofa.

'you know I'm really ticklish stop it! He-he!' I giggled trying to push him off.

'you know its not gunna happen sonshine' he said carrying on tickling me, but he stopped when the door opened and marshal walked in

'hello?' he said looking around ' is it just you two in here?'

'no, 1 sec ZORA NICO GRADY AND TAWNI, MARSHALS HERE!' they all rushed out and stood next to us.

'what is it?' asked Nico 'we were almost on level 48 of cheese pants in the city!'

'this is more important than cheese!' said marshal as Grady gasped

'more important than cheese?' he asked

'there are a lot of things more important than cheese Grady, like me 'cause I'm pretty!'

'yes well its not you tawni, you know the new girl I told you about last week?' marshal asked

'come on we need to go get the cake I made for her, I just cant wait until she gets here. I wonder what she's like...' I said before we went to the comissionary fridge where I left it for safekeeping.

wow, I was finally here in holly-wood! I couldn't believe that I was driving up to condor studios my new work place! As I caught a glimpse of the giant so random! Poster on the side of the building I mentally squealed I was there, I wondered when I'd see them: sonny, Chad, tawni, Nico, Grady and zora as I was now one of them! The car stopped and my mum looked at me

'oh, love you too' I said feeling a little stupid

'now marshal told me to give you this when you get here, I think its a note from the cast' I grabbed it impatiently, brushing my long brown hair out of my eyes before beginning to read:

hi, we'd just like to say welcome to so random! Make sure you don't open sarcophagus' without knocking when you're in the prop-house ,don't eat identical popcorn twins or steal coco moco coco. That's all for now

the cast of so random!

'wow' I said under my breath 'wait sarcophagus'? Popcorn twins and what is coco moco coco?'

'I don't know!' replied my mum

'well I guess life's going to be more interesting now!'

'I guess it will be' she said, but I couldn't wait any longer I jumped out of the car shouting a hasty

'love you mum' before pushing the doors open and walking inside. I stopped in the doorway stunned, it finally hit me. I was on a hit American TV program. 1 week ago I was at home doing maths homework and complaining via facebook about homework. But then I got the call and used facebook to celebrate! I walked down the hall towards a balding man and tapped hi on the shoulder

'hello, oh you're Riona the new girl on so random! Aren't you?'

'yeah! And if you don't mind me asking, who are you and how do you know me?' I asked, not wanting to be rude

'I'm marshal, director of so random!'

'oh! Marshal you talked to me over the phone, sorry you sound different in real life, not that the phone isn't real life but... sorry I'm rambling' I said embarrassed I was nervous which is strange 'cause I'm not usually.

'its fine, now the prop-house is down the hall, second door on the left the cast will be there in a bit'

'bye' he said as I walked towards the prop-house, I pushed open the door and saw the large room filled with props from sketches on the show. I saw the sarcophagus and suddenly understood the sarcophagus part in the letter. 'oh sarcophagus' I knocked on the door and waited. No-one there I thought and pushed it open. There was a gap just large enough to fit into.

'may as well give it a try' I said to myself before getting in, it was surprisingly roomy. Suddenly I heard people come in through the door

I walked into the prop-house to find it empty

'who?' asked tawni looking at her nails

'who?' she said again

'oh never mind' I said walking further in. suddenly the sarcophagus opened and a girl that was about 15 stepped out 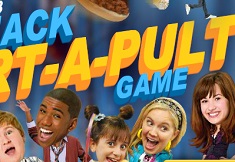 'you are obviously one of my fans, sorry you are not allowed in here, cast only' tawni said obnoxiously.

'what? I forgot who's in the cast again?' asked tawni

'oh don't mind her, you're Riona then? The new girl?' I asked 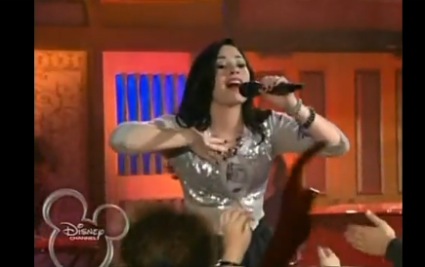 'yeah I am I am so exited to be here' when she said that I had a good look at her. She had long brown hair with a side fringe which she wore down. She had hazel eyes (brown and green) with a bit of mascara on them, she was pale with a few freckles. She was about mid-height and wore a red vest top and a cropped top over it that was red and white stripy and said I Paris, dark skinny jeans and red converse.

'you've been to Paris?' I asked her

'well I've been to France but not Paris though' she said 'but its cooler being here than going to Paris!'

'actually its my dream to be on so random! And isn't gorgeous and pretty the same thing?'

'I don't know, but I know I am both!' Riona looked at me and I shrugged

'so where's Chad, Nico and Grady?' she asked, wow she did watch our show

'fro-yo? Oh right ice-cream' she then grinned 'this is gunna be great'

'yeah it is' I said as the boys walked in

'hey- who is this?' Nico asked flirtatiously

'oh then its very nice to meet you' Nico said putting emphasis on the very, tawni pulled him away. What was going on there? I thought

'I knew I'd get that one. I'm from the north so I don't speak posh, barely anyone from England does, its just a stereotype'

'oh...' said Grady, not knowing what a stereotype was.

'a stereotype is when you have a pre-conceived idea of what someone is like because of where they come from' said zora,

'anyway I'm really looking forward to working with you guys' Riona said before rushing over and pulling us all into a group hug, only me and Nico seemed happy about this. When we pulled away she said.

'sorry, i'm a hugger' she said

'so am I' me and Nico said, tawni gave Nico a look and he stepped back.

'I feel like I know you all already!' she said grinning again 'this is gunna be great!'

so that's the first chapter of the sequel to Chad in chuckle city, I'd recommend reading it before finishing this or some things wont make sense. Hope you liked it