'Folsom Prison Blues' is a song written in 1953[6] and first recorded in 1955 by American singer-songwriter Johnny Cash. The song combines elements from two popular folk styles, the train song and the prison song, both of which Cash continued to use for the rest of his career. It was one of Cash's signature songs. It was the eleventh track on his debut album With His Hot and Blue Guitar and it was also included (same version) on All Aboard the Blue Train. A live version, recorded among inmates at Folsom State Prison itself, became a No. 1 hit on the country music charts in 1968. In June 2014, Rolling Stone ranked it No. 51 on its list of the 100 greatest country songs of all time.[7]

Cash was inspired to write this song after seeing the movie Inside the Walls of Folsom Prison (1951) while serving in West Germany in the United States Air Force at Landsberg, Bavaria (itself the location of a famous prison). Cash recounted how he came up with the line 'But I shot a man in Reno, just to watch him die': 'I sat with my pen in my hand, trying to think up the worst reason a person could have for killing another person, and that's what came to mind.'[8]

Cash took the melody for the song and many of the lyrics from Gordon Jenkins's 1953 Seven Dreamsconcept album, specifically the song 'Crescent City Blues'.[9] Jenkins was not credited on the original record, which was issued by Sun Records. In the early 1970s, after the song became popular, Cash paid Jenkins a settlement of approximately US$75,000 following a lawsuit.[10]

The song was recorded at the Sun Studio in Memphis, Tennessee on July 30, 1955. The producer was Sam Phillips, and the musicians were Cash (vocals, guitar), Luther Perkins (guitar), and Marshall Grant (bass).[11] Like other songs recorded during his early Sun Records sessions, Cash had no drummer in the studio, but replicated the snare drum sound by inserting a piece of paper (like a dollar bill) under the guitar strings and strumming the snare rhythm on his guitar. The song was released as a single with another song recorded at the same session, 'So Doggone Lonesome'. Early in 1956, both sides reached No. 4 on the Billboard C&W Best Sellers chart.[12]

Cash opened almost all of his concerts with 'Folsom Prison Blues,' after greeting the audience with his trademark introduction, 'Hello, I'm Johnny Cash,' for decades. Cash performed the song at Folsom Prison itself on January 13, 1968, and this version was eventually released on the At Folsom Prison album the same year. That opening version of the song is more up-tempo than the original Sun recording. According to Michael Streissguth, the cheering from the audience following the line 'But I shot a man in Reno / just to watch him die' was added in post-production. A special on the Walk the LineDVD indicates that the prisoners were careful not to cheer at any of Cash's comments about the prison itself, fearing reprisal from guards. The performance again featured Cash, Perkins and Grant, as on the original recording, together with W.S. Holland (drums).[11]

Released as a single, the live version reached number 1 on the country singles chart, and number 32 on the Hot 100, in 1968.[12]Pitchfork Media placed this live version at number 8 on its list of 'The 200 Greatest Songs of the 1960s.'[14] The live performance of the song won Cash the Grammy Award for Best Country Vocal Performance, Male, the first of four he won in his career, at the 1969 Grammy Awards. 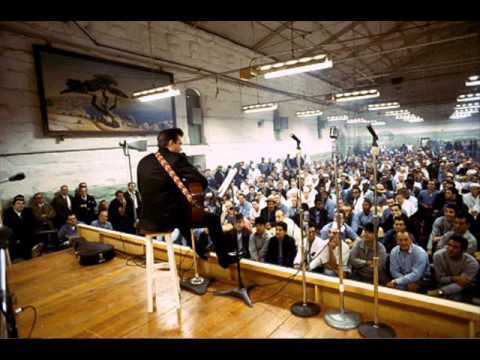