In Heroes of Might and Magic III: The Restoration of Erathia, you take the part as a commander in Queen Catherine's army and lead Enroth's greatest heroes and mightiest creatures to battle in an attempt to regain the kingdom of Erathia. Catherine's father, the King of Erathia, was murdered and subsequently resurrected as an undead warlord who now leads forces of darkness and chaos against his former kingdom. Only Catherine, with her Enrothian forces, has the chance to avenge her father by ferreting out the traitors who killed him, restore the family throne, and free his spirit from the undead flesh in which he now resides. You are the commander of her army.

The game features 3D turn-based play, eight new towns, sixteen different Hero types and well over a hundred combat units. Multi-player options accommodate up to eight players via hotseat, local area network or computer opponents. As an enhancement from previous titles, the game now supports 800x600 resolution. Heroes of Might and Magic III: The Restoration of Erathia is the third entry in the popular Heroes of Might and Magic series and expands the playing world and the forces that inhabit it to epic proportions.

Fantasy-themed strategy games have two great series--Warlords and Heroes of Might & Magic--and one game that damn well should have been a great series--Master of Magic.

While I've always thought Master of Magic was the best of the bunch, due to its rich magic system and more detailed, Civilization-style economy, the latest installment of the Heroes series comes close to changing my mind.

Be advised, Heroes of Might & Magic has a lot of great gameplay in it. Like all great turn-based games, it has that addictive, up-all-night quality. It achieves this by making you worry about four or five things at a time, just enough to keep you busy but not enough to overwhelm you. There's a tactical mini-game, cities to upgrade, costly armies to raise, and an exploration and overland adventure mode, but the game never really bogs down into the sort of tedious micro-management that plagues most other explore and conquer games near the end of a scenario.

At the heart of the game are the heroes. There are more than one hundred individual, pre-packaged heroes, each with their own name, portrait and special abilities. This is very reminiscent of Master of Magic, though the disparity between heroes you can hire early in the game and later on is not as great.

Heroes can be one of sixteen different character classes, which is more than you'll find in most straight up roleplaying games, let alone a strategy game. Each of the eight town types has two character classes associated with it, generally one mage type and one warrior type. So for example there are Battle Mages and Beastmasters, Death Knights and Druids, Wizards and Witches. They range from the normal Humans, Elves and Dwarves to more outlandish characters like Demons, Vampires and Efreeti, though the race of the hero has virtually no affect on the game.

More important than the class of the hero you hire is getting them up in levels. A tenth or twelfth level hero of any class is worth far more than a bunch of low level minions. What is key is hanging on to your heroes, building up their levels, and equipping them with useful magic items and powerful armies.

Generally, you're going to want as many heroes as you can afford, and you're going to put them into a variety of different roles. Your toughest and most experienced heroes go out on the front lines with powerful stacks of troops. They'll be used to take over enemy towns and intercept enemy armies before they get into your territory. They are your game winners.

You'll also want one hero per town, leading the garrisons, though a lot of times I found myself skimping in this department, particularly with cities well away from the front lines. Finally, you'll use other heroes as scouts and explorers, and a couple others for more mundane chores, like going to the sawmill once a week to collect resources, or ferrying troops from the cities where they were bought to the heroes on the front lines. These tasks are suitable for low-level duds.

But when two armies meet, the heroes don't actually get out on the battlefield and fight. That's handled by your armies, and stacking tons of good troops with each hero is the key to victory. Every hero can handle up to seven slots of troops, and there is no real upper limit to how many of one creature will accompany your hero. So a knight might have 200 pikemen, 100 archers, and 20 griffins with him, for example. What heroes add to the fray are combat bonuses, acquired either through experience or magic items, and spellcasting ability. They can also direct the siege equipment that can accompany an army.

When combat does occur, the game shifts away from the overland map and onto a hexagon grid that serves as a battlefield. Each creature type is represented by one big icon on the field (even if the icon represents only ten or a hundred pikemen, it's always the same size.) Units take turns moving and attacking, and a really good, if complicated, formula is used for dishing out damage and allowing the defending units (assuming they survive) to strike back.

While this tactical mini-game worked fine in the first Heroes of Might & Magic games, it does look and feel a little simplistic compared to some recent mini-games, like Caesar III. And while it isn't actually simplistic, since the game mechanics are balanced, highly detailed and very sound, the scope and presentation of the battles--goofy, over-sized characters on a narrow, flat field--doesn't really stack up with other wargames, fantastic or not. (Although it does beat Warlords III and that game's almost non-interactive combat, hands down.)

During the six fairly short campaign games, most of your heroes will carry over from one scenario to the next, though strangely, their accumulated artifacts and armies do not. I found that kind of a rough transition. What are my Heroes doing with their magic items after each mission, throwing them away?

Another thing I've never understood with this series however is why you can't flee a battle without having your hero quit from your service. This creates an unnatural situation of 'win or die', and for the player it simply means you're going to save the game before you go into every battle. Why can't you retreat? This brings further annoyances, since the save and load game interface is a bit cumbersome, involving something like four or five steps to save a game, and it quits out of the engine altogether if you just want to reload a game. That's inconsiderate.

Nonetheless, these complaints can't justifiably lower the final score. They're more questions I had with the design decisions, because I prefer the city-based, not the stack-based, strategy games, than anything else. And certainly a number of nice new design touches have made this the best Heroes game to date. For example, you now have to place magic items on your hero, rather than letting them carry around as many as you like. And the world of Erathia features subterranean levels, like those in Cave Wars or Master of Magic, which makes for some more interesting strategic planning.

Besides the six campaign games, which take a while to finish and let you play virtually every type of troop and hero in the game, there are some forty odd individual scenarios as well as a scenario editor, which should be more than enough gaming in one box to keep you busy for a good six months to a year, depending on how often and regularly you play.

The multiplayer gaming features have been improved with more options for hooking up with other players and more for the player to do in the game when it's not your turn, but there are still some networking issues that need to be worked out. But that's probably less important in a turn-based strategy game than it would be in a real-time game, since most people are going to want to play this one against the computer, at least first.

The game's music is up to the professional quality of its predecessors, though this time it's in MP3 format. That's actually kind of handy--I'm listening to the MP3 tracks in Windows while I write this review. The graphics are probably the best in any turn-based strategy game to date--even the recent Alpha Centauri and Call to Power--but as to the story, I honestly didn't pay much attention to it, since it was so thinly woven into the actual missions, and there is never any diplomacy or NPC interaction to speak of. Still, fans of the series as well as the Might & Magic roleplaying games will find much of the storyline and setting familiar.

Heroes III doing really do anything radically different than its predecessors. The number of town types, magic items, heroes, monsters and the like have all been increased, in some cases doubled, but the core game mechanic is pretty much the same. Battlefields are bigger, but combat is essentially unchanged. The graphics are sharper, the maps are bigger--but basically any element of the previous game have only been expanded and refined, not revised. There are a few new touches--underground maps, better AI--but there aren't any major surprises. But in the case of Heroes of Might & Magic, more of the same isn't a bad thing. If it ain't broke, don't fix it. 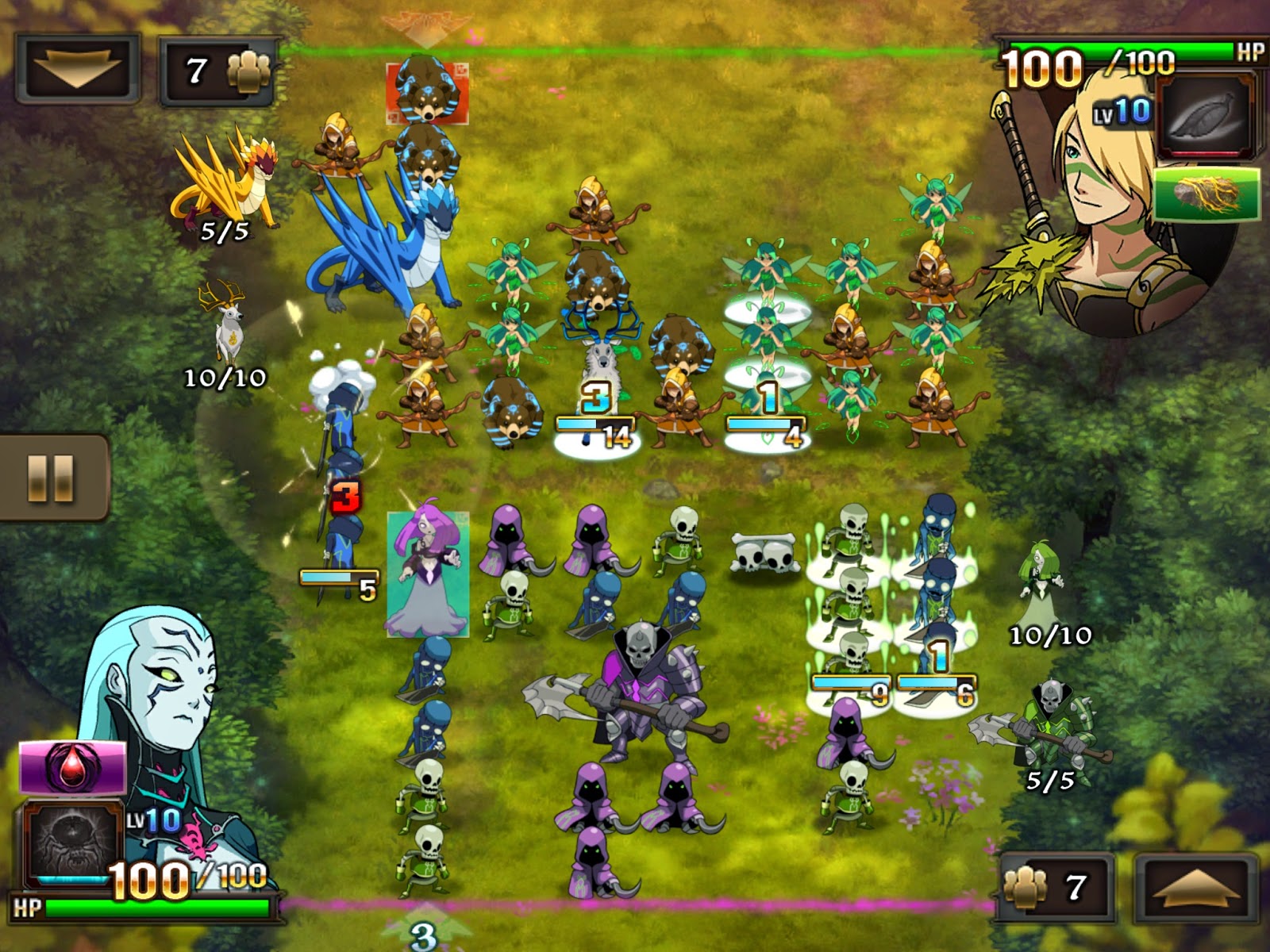 So if you've already bought and played Heroes of Might & Magic I and II, you'll definitely be happy with III. And if you're new to this series, pick this one up and give it a try.

In Heroes of Might and Magic V, hero can learn a new skill, upgrade an existing one, gain a new ability or create combos of multiple abilities in gaining a new level or visiting special buildings on the map adventure. There are two sets of skills available to heroes: racial skills and tactical skills. A hero can have up to five regular skills and always has the proper racial skill. Skills are divided into four levels: Basic, Advanced, Expert, and Ultimate. Each skill is associated with three to five abilities, depending on the breed of hero. Each level of skill gives the hero the chance to learn a skill in the skill. That is, a hero with a basic level of ability to learn a skill, Advanced level two and level three experts. The ability is not immediately learned when the hero increases the corresponding skill level.

Note: Supported Video Cards at Time of Release: Nvidia GeForce 3/4/FX/6 series (GeForce 4 MX not supported), ATI Radeon 8500/9000/X series,Matrox Parhelia. Laptop versions of these chipsets may work but are not supported. These chipsets are currently the only ones that will run this game.