The Soft Coated Wheaten Terrier is named after its silky, soft coat. Their wheaten color is a darker brown shade as puppies and gets lighter until they are about 2 years old. Originating in Ireland, this breed was brought to the United States in 1946. Is abundant and wheaten-colored and falls in soft waves in adulthood. Character The Soft Coated Wheaten Terrier is active, but not hyperactive. It is always eager to make new friends. It is alert and watchful, cheerful and curious. The Soft-Coated Wheaten Terrier originated in Ireland as an all-around farm dog, perhaps serving in this function for hundreds of years. Besides the ever-essential terrier function of extinguishing vermin, he also helped round up stock and guard the homestead.

The wheaten terrier is a friendly, outgoing chap, with an attractive wheat-colored coat. Developed as an all-around farm dog in Ireland, he likes to stay by your side in case you need help with anything. Two distinct coat types exist within the breed.

Soft and silky, the Irish coat falls in soft curls following the shape and contours of the wheaten’s body. Shiny and fine on adult dogs, the puppy coat can be sparse and coarse, making him look a little shaggy before he grows into it. It can take three years or more for this coat to mature to its full splendid silkiness. This is the original coat type, allowing the dog to come in from the mud and rain needing very little clean-up from his farming duties. Indeed, photos of wheatens dating back to 100 years ago appear to have this coat.

This coat is denser and heavier, and although the mature coat also has soft waves and curls, it lacks the glossiness of the Irish coat. While some breeders distinguish the American coat as being even a bit denser than the English, most group these two together. The heavy-coated pup gains his mature look quicker than the Irish pup. The heavy-coated wheaten resembles a plush teddy bear, and he often has black ears and markings on the face.

By the time the Irish-coated wheaten reaches about 2 years old, his coat will be soft but will still carry a few bristles. Because this type of coat doesn’t mat or tangle as easily as the heavier coats, you won’t have to groom him as much. Still, brushing him several times a week encourages bonding and gets him accustomed to being groomed. The English and American coats grow quickly and steadily throughout life and will need regular brushing. Professional grooming every three months or so will keep the heavy coat looking its best. A professional groomer will also be able to shape the hair of both types to achieve the typical wheaten look.

Wheaten terriers don’t shed like most dogs. Their coats keep growing like human hair and will need regular trimming. Low in dander, the wheaten is often recommended for dog-loving allergy sufferers.

Video of the Day

Brought to you by Cuteness

Leslie Darling has been a writer since 2003, writing regularly for 'Mississippi Magazine' and 'South Mississippi Living,' specializing in food and wine, animals and pets, and all things Southern. She is a graduate of the University of New Orleans. 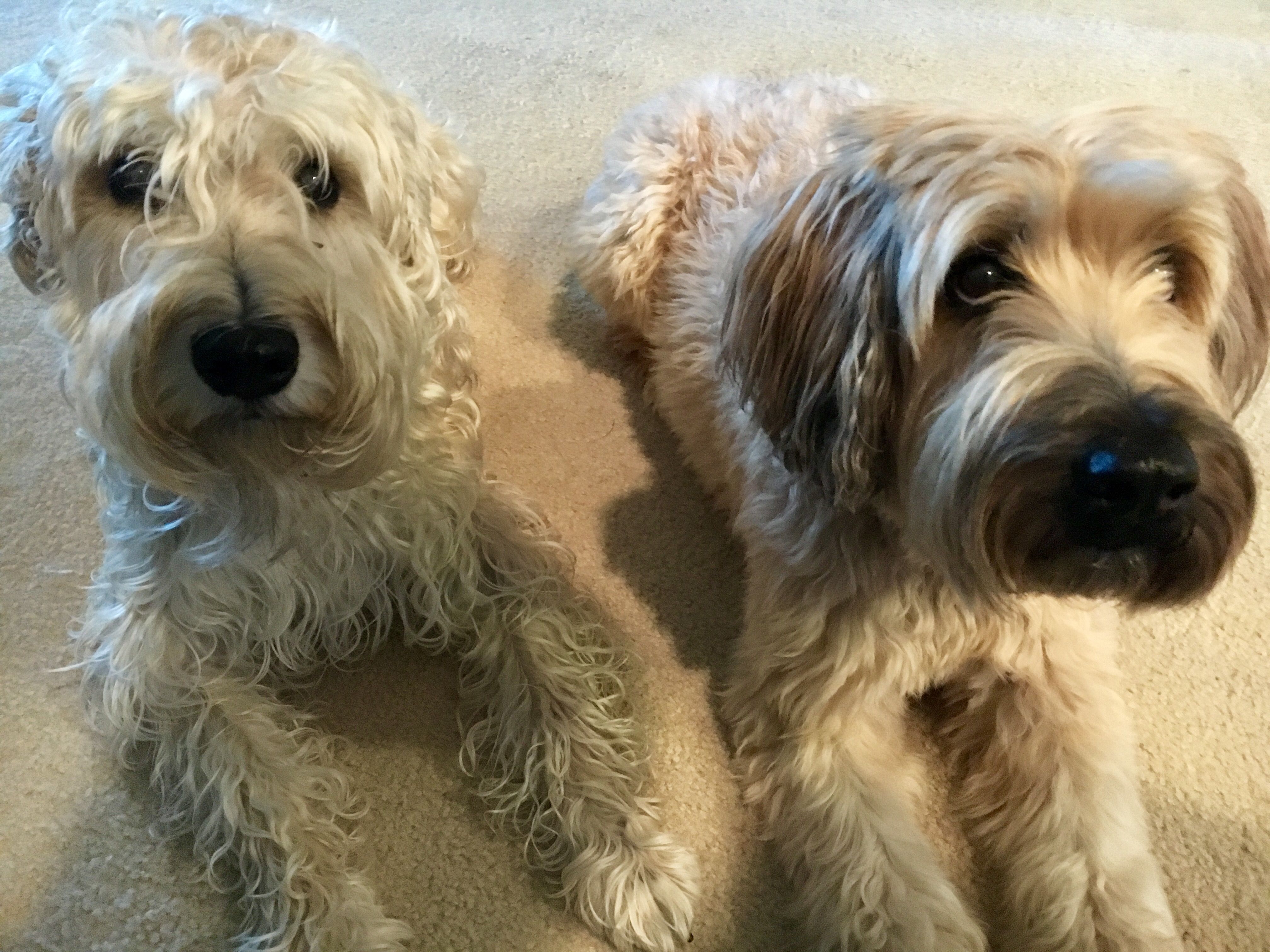 The Soft-coated Wheaten Terrier (Irish: An Brocaire Buí) is a pure breed terrier originating from Ireland. Wheatens typically have one of two coat types: Irish or Heavy (American). The Irish coat is generally silkier and wavier than the Heavy, or American coat, which is thicker and fuller. Wheatens are generally friendly and playful, and tend to get along well with children and other dogs.

The Wheaten was bred in Ireland for over two hundred years to be an all-purpose farm dog whose duties included herding, watching and guarding livestock, and vermin hunting and killing.[4] They share a common ancestry with the Kerry Blue Terrier and the Irish Terrier but were not owned by gentry.[4] In Ireland, they were commonly referred to as the 'Poor Man's Wolfhound.' Their tails used to be docked to avoid taxes and were often kept to a specific size.[5]

Despite its long history, the Wheaten was not recognised as a breed in Ireland by the Irish Kennel Club until 1937.[6][7] In 1943, the British Kennel Club recognised the breed in the UK as well.[8] The first Wheatens were exported to Lydia Vogel in the United States in the 1940s, but serious interest in the breed took another ten years to develop.[9] In the 1970s, the first Wheatens were imported into Australia by Anubis Kennels. Finally, in 1973, they were recognised by the American Kennel Club. Recent importation of Irish-style dogs have improved and broadened the gene pool. Today, Wheatens compete in obedience, agility, and tracking and are occasionally used in animal-assisted therapy as well.

Puppies have dark coats of red, brown, mahogany or white. Their muzzles and ears may be black or dark brown. The reddish-brown puppy coat gradually grows out to nearly white before maturing into a wheaten-colored coat as they get older. The adult coat typically matures by 3 years old and may contain black, white, or darker brown 'guard' hairs in addition to the lighter wheaten colored hair. If adults ever have skin injuries, the resulting hair growth (wound hair) will be the dark color of their puppy coat before it eventually grows out to the wheat color. It may also come out to a molten chocolate color, either white or milky colored fur .[10]

The Soft-coated Wheaten Terrier is a medium-sized dog, which ranges on average from 17 to 20 inches (43 to 51 cm) in height and about 30 to 45 pounds (14 to 20 kg) in weight. The breed has a square structure and is well built. Their soft, silky hair does not shed like most dogs; like human hair and Poodle hair, it keeps growing; they do need trimming and should be brushed and combed once a day to avoid mats. They are very smart dogs, and are easy to train. They love people, and they rarely have aggression issues if obtained from a reputable breeder.[11]

The Wheatens seen in Ireland today are of the same size, shape and coat texture as those seen and documented well over 100 years ago. Evidence of this can be seen from the famous artwork 'The Aran Fisherman's Drowned Child' by the Irish painter Frederic William Burton.

Soft-coated Wheaten Terriers are generally a long-lived breed. They are susceptible to various heritable diseases, although are most known for two protein wasting conditions: protein-losing nephropathy (PLN), where the dogs lose protein via the kidneys;[12] and protein-losing enteropathy (PLE), where the dogs fail to fully absorb protein in their digestive tracts, causing it to pass in their stool. Both PLN and PLE are potentially fatal, but if caught early enough, can sometimes be managed with strict dietary changes and pharmaceuticals. Laboratory tests can aid in diagnosing PLN and PLE; Wheaten owners should check their country's advised testing protocols.[13] Research suggests that PLE and PLN often are more prevalent in female wheatens and often happen in concurrence, with PLE following diagnosis of PLN. While a genetic predisposition has been suggested, an unknown mode of inheritance remains.[14] Research programs, mainly in the United States and the United Kingdom, are looking for answers.[13][15]

Other Wheaten health issues are renal dysplasia, inflammatory bowel disease, Addison's disease,[16] and cancer. Some Wheatens can suffer from food and environmental allergies, and can be prone to developing the skin disease atopic dermatitis.[15] Potential owners of Wheaten Terriers should discuss health issues with a breeder before deciding to get a puppy.[17]

The Soft-coated Wheaten Terrier is an energetic and playful dog. It requires patience and consistent positive training. Harsh methods will often result in fear and/or aggression. A positive, even-handed approach works best with this intelligent yet headstrong terrier. It is an enthusiastic greeter, and will often jump up to lick a person's face, commonly referred to as the 'Wheaten greetin'.[18]Wheatens are considered less scrappy than other terriers, but they can be hyper and more active than many other breeds.[4] For this reason these dogs do best when they are exercised regularly.[4] They are cool weather dogs and can become easily overheated in hot weather. If socialised with cats and puppies, they may get along fine with them; if not, care should be taken in introducing them to cats, as the breed has a very strong 'prey drive' because of its vermin-hunting origin. Wheatens are extremely friendly and loving pets, and get along well with other dogs if properly socialised. Wheatens are very protective of their families and, although they may bark in alert at strangers, they rarely get aggressive. Many Wheaten owners thus say they make great watch dogs, but poor guard dogs. Wheatens are a great dog for children and are generally friendly towards them.